How to remove a phython from your vehicle – by Chad

I had a very interesting experience this month, whilst on an early morning game drive. Keegan and I came upon an African rock python near the Sundays river. One minute it was lying calmly next to the road, then it got a fright and tried to slither away, but the two game vehicles were in its way, so it went under the vehicle and started to climb up and around the wheel, trying to find an escape route.

Keegan and I tried to get the snake out from under the vehicle, but after about 10 minutes of struggling, Siya, who had driven up behind us came to the rescue. The three of us tried to free the snake, with all the guests standing at a safe distance watching.

After pulling and tugging (firmly but gently) and much effort we finally decided to put the jack under the vehicle allowing us to remove the wheel altogether in order to free the python from being stuck around the wheel. It was an enormous and spectacular specimen. Stay safe python! 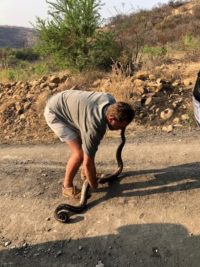 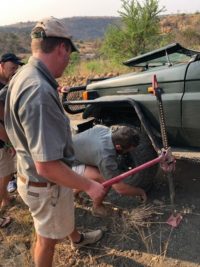 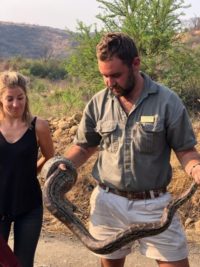 It seems to be the month for snake sightings for me. A first for me was a sighting of two Thread snakes. I was laying shale on the roads and moving rocks off the road when I came across the two snakes under a rock. As I had never come across one before I had originally thought they were Mole snakes, until my colleague corrected me. I love learning on the job and every day I come across, hear, see or learn something new and interesting. It is definitely a privilege to be living and working in the bush!